Waking up early, at 8, whilst the others sleep in my room, I packed my bag ( just a sling, I’ve fallen in love with these! So practical and easy enough to carry anywhere! ) and headed out for the long walk to the Rijksmuseum, which opens at 9. I could have rented a bike, but that was just unnecessary for me.

When I reached at about 8:50, I was surprised to see a small line outside, because it’s generally packed and Kor advised me to go through Rijks first. Well, more space for me, I guess! I already had a ticket, so it was much faster. i could just go in without standing in the ticket line! I got a map of the museum and thought about the best way to go through all of it. I soon realised it was too big to go through everything in a day, let alone the 3 hours I had estimated for Rijks.

Pro Tip : there’s an app for the Rijksmuseum that has the same tours as the iPods being rented at the museum for 2 euros each! Save money just by downloading the app! Even if you forget to download it before hand, there’s free wifi in Rijks to do the same.

Moving on, I first decided to see the special collections on the 0th floor, moving up to the 3rd floor. The special collections included Ship models, which really caught my attention, as well as the gun collection from the XXth Century. I can’t remember the number. It suffices to say, it was big enough to take up one entire room! I skipped the clothing and porcelain and delftware. Not interested.

This is just how long I could wait. I skipped floor 1 and went directly to what you have been waiting to hear about. The painting(s). Rembrant. Vermeer. It’s placed in a Hall called the gallery of honour, overlooked by the great hall, called Voorhal with tinted glass paintings, the kind you see in ancient churches and cathedrals. Only, these had painters instead of the saints. Amazing. 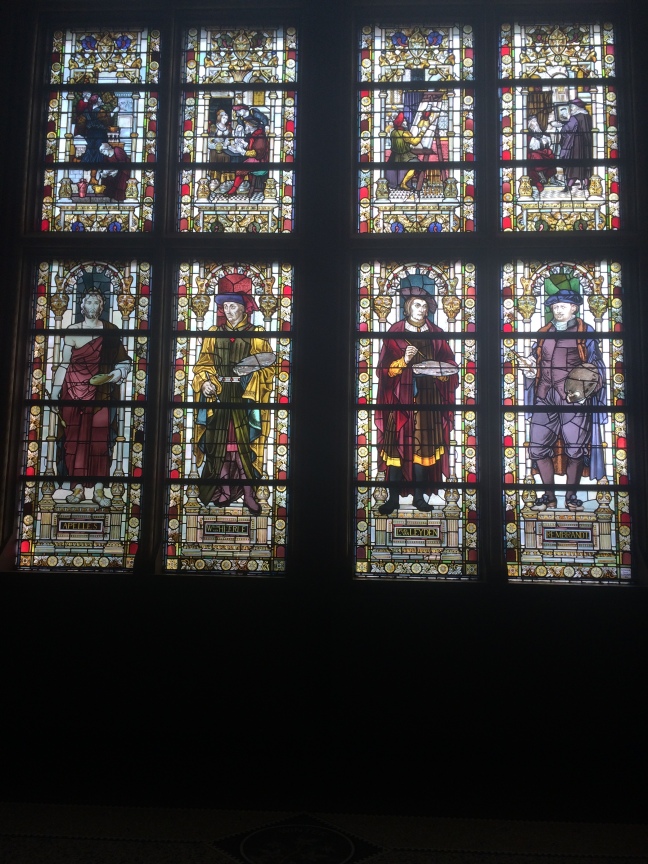 I used my phone for the tour of this gallery as I didn’t want to miss anything important. And boy, what I saw left me spellbound! You could tell where the famous paintings were, simply by the number of people standing in front of them! I decided that in order to judge how great a painting really is, I would compare the nuances and the little things that the guide was telling me about the painting with the painting next to it. Not the best way to go about it because some neighbours were starkly different, but it worked most of the time! I got to train my artistic eye and learn a bit about the history. The floors are divided by centuries, and after having explored the floors, After 3 hours, I decided to call it an afternoon.( Get it? 😉

I ventured forward to the Van Gogh, which is close by to meet a line 1 hour long! Ah, damnit! At this point, I started to regret buying the ticket for Van Gogh as it’s just another painting museum. I’d already seen Van Gogh’s self portrait, the most famous one, in Rijks. ( He drew a total of 13 self portraits to practice various techniques) The line soon ended and I was inside. 3 floors, 1000 paintings( I think? ) but more than that, it was a life story that engulfed me completely! This was a totally different experience, the museum is thought out really well! You can see the difference, when he started and how he ended up where he is, and how his last painting is not his best, and how he painted the most in his last year. Who inspired him, where all he went to seek inspiration and ofcourse, his most famous works. Sadly, I was not allowed to take pictures inside. So, I can’t show you. If you get the chance to go, don’t miss it! It’s well worth the 17 euros!

Tired beyond measure, I decided to first grab lunch at an eatery next to the famous I AmSterdam sign, followed by a relaxing walk in Vondelpark, Amsterdam’s version of New York’s Central Park! Less skyscrapers around, more birds and ducks! I even got to see a sweet purple heron. After an hour or so, I decided to make the long walk back home.

since this day would be my last day in Amsterdam, and I had already purchased the RLD tour, I decided to get home, rest for a while and go out for this tour! I reached on time for the tour, thankfully sans rain, at the famous Dam Square. I got lucky with the iPhone:

The places this tour covers, are mostly where you would have already been, if you’ve ever ventured into the Red Light District. However, just by looking around, you can’t find out about what’s going on and how it works. After all, there aren’t any sign boards like in museums explaining whats happening; just pretty and some not so pretty women all around. I found it to be really insightful. Interesting stuff going on here. It’s 100% legal, all have proper work permits and there are systems in place to ensure that they aren’t forced into it. They rent the “windows” for 8-12 hours, for about 100 euros, and earn about 20-50 euros per customer, meaning they need atleast 5 customers to break even, which may not sound like much, but consider the fact that there are 400 such windows in a small area. Tough competition.

Towards the end of my tour, it started raining snakes. This time, pythons and anacondas! Damn it, I had the wind resistant jacket, but even that couldn’t save me. Drenched to the core, cold, I ran back to my hostel, once we parted. I forgot to get dinner, which I realised when I got in. Ah, f**k it. I made do with some dry fruits. Took a bath. Hanged the clothes to dry, and checked the route for – after I take the TGV to Douai, the route to my university.
The hostel was nice enough to pack me a decent early breakfast. So, off to college!

One thought on “Amsterdam : Day 2”