Waking up to the alarm of my room mate, I got up, got dressed, all ready to venture forth for our last (and sadly first proper day ) in Barcelona. We had the bus for Paris leaving at 4:30 PM. Haha, yes, I know, not a lot of time, but that’s how it is. On the other hand, the 28 hours in Barcelona were so full of experiences! I don’t think I would have been able to keep up had we stayed longer.

This day, I was determined to attend the tour, to find out the true story behind yesterday’s spectacle. This was the only aim for the day. Sumit, the same college-mate who went out with me last night, decided to join me; while Puskar followed his calling : Camp Nou, Barcelona! ( Football stadium, for the ones not into football ) and while the rest 2 were creating a hilarious story, which you’d hear about soon enough.

So, we made the reservations ( not taking chances today!) and checked out at 9 AM, to reach the tour point at about 9:40 AM. We got our tickets and waited for the tour to start. Haha, my tour guide turned out to Tommy! I thanked him for his advice last afternoon and we went on to cover quite a bit of history. Starting at the Barcelona Cathedral, to the eternal flame, to the infamous La Rambla! He talked a bit about the Catalonian movement, the million flags, Aragon and the Prince of Madrid and the sieges. The Catalonian flag, with 4 red stripes, actually comes from a symbol during the war. <Some important guy> fell, and <another important guy> dug his hand into the other’s wound, and used the blood on his 4 fingers to draw 4 lines on his shield, paying his respects, which came to be known as the coat of arms! <Sorry, don’t remember the names of the guys>.

We stopped in a pretty indoor garden of the Viceroy’s Palace.

Oh, and it’s moderately hot in Spain! Hence the t-shirt and shorts. En route, we also apparently crashed a wedding. ( Technically not, the church is open to the public. But it was fun to catch a glimpse of it) The tour soon ended, and we consulted the map for our next destination : The famous Barcelona aquarium, which was slightly far, but we had about 3.5 hours to get to the bus. So we might as well go. On reaching there, we saw that the ticket was 20 Euros. Haha, we went back faster than we got here! ( Not really.) We ditched the idea of the aquarium, reasoning, that there should be a cheaper aquarium somewhere someplace, and I chipped in, I’ve seen these fish live, in the ocean, in their habitat. This can’t beat that any day. Interesting how the mind spins things off to suit your needs. Anyways, we moved on, checked out the harbour which had a lot of really cool ships! The kind with sails, not the modern ( slightly ugly?) ones. Not really, there was a really huge one specifically for the public to check out! Ahaaan, the number of ropes on these is just incredible!! 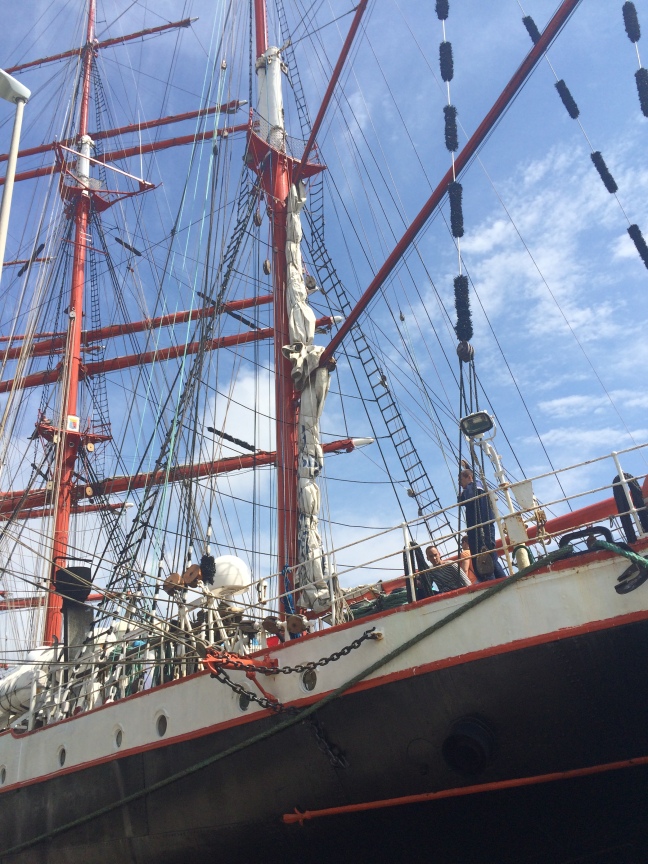 Moving on, we were greeted by one of the best sights in Barcelona : Unloading of supercars on the port for super rich people.

I clicked this one ( not allowed to come any closer) but Sumit clicked them all! Here’s another awesome picture he got :

Feeling tired, I wanted to go back, but on Sumit’s persistence and that awesome quiche, we decided to go to the beach! Thanks a lot, Sumit, for helping me acquire this experience as well! The beach here, was entirely different! I loved it. Even with all that gear, we got out our swimming trunks, prayed that no one took our bags while we changed and were into the water! Crazily enough, just an hour before our bus left for Paris. ( If we missed it, we would have been completely stranded!) This, almost completed my Barcelona experience. Almost? what else is left? Just one small thing. When we packed up, took a shower, and started moving back, I was on the look out for restaurants serving the Barcelona speciality : seafood. Tommy told me that they got the best seafood here, and wasn’t he right! In a little restaurant around the corner, in an unknown street ( We were just walking in the general direction : I have a good sense of direction) Wait, that reminds me!

Pro Tip : Whenever you’re going to a new place, try and memorize as much of the map as you can, mainly important monuments and your hostel. It usually just takes one glance to obtain a general idea, but very helpful in navigation!

Oops, yes, so, there was this store selling fried codfish with lemon : 8 pieces, 2.95 Euros. That sounded like a bargain, and we went ahead to have the most amazing fish I have ever had in my life! Wow, those 4 pieces I had were simply extravagant! Haha, I wish I’d taken more! Yes, Barcelona experience, complete.

We reached the bus, to hear about Puskar’s Camp Nou experience and ofcourse, the hilarious story: The other two, unaware of the legend of La Rambla, ventured in to find someone throw paint all over their bag, point them to a place to clean it, and, then elope with that bag. Okay, probably not hilarious for them 😛 But the good part is, they found their bag again, with nothing missing. We think that was because there was nothing inside to steal. We decided, not to let Animek and Tulika venture out on their own ever again.

To the next adventure!