On Port Blair, we were booked in the Sinclair Bay View Hotel, which is one of the better hotels on the coast. Not the beach, just the coast! The Makruzz( Ferry from Havelock) reaches at about 5:30 PM. Needless to say, we headed straight to the hotel, with an auto-wale bhaiya having convinced us to not take a taxi ( That’s 50% off.). How he managed to fit us and our 3 suit cases in that single auto is still a mystery to me.

What you need to know about Port Blair is, there is not much you can do over there. Also, the Wi-Fi doesn’t work, even at hotels that offer free wifi services. However, it didn’t matter much to me as I had decided before hand not to use any form of data connection at all. The only time I used my phone in the 7 day long trip was one fine evening when I got a call from my friend asking me to help her with her US Visa Application. I was quick to mention that I was not in town, and the call lasted much shorter than she or I would like. 😉 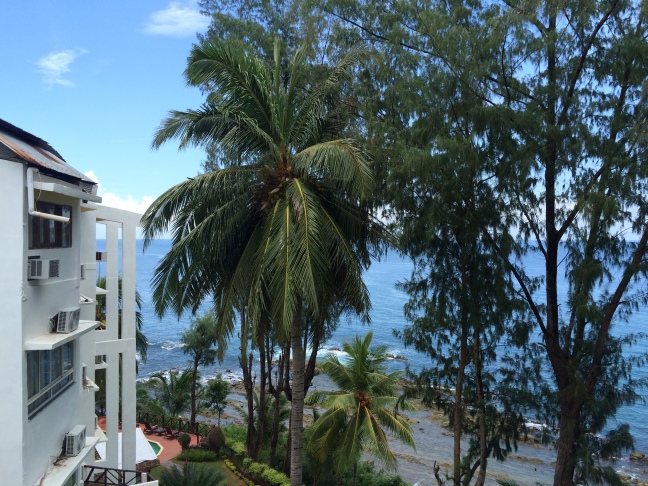 What’s really amazing about Sinclair Bay View is that, there’s a pool table and a Pool!( Not sure if you were expecting to hear that after the amazing stuff in Havelock 😛 ) Dev and I spent all our evenings honing our billiards skill and bonding over Snakes-and-Ladders. If you can call fighting, bonding. We also met quite a few visitors, discussing our travels : This is where and how I found out what a majority of tourists do, the staying in Port Blair first part. Also, I was not looking forward to going to the cliched “Sound and Laser” show at Cellular Jail, it seemed so overrated. These talks confirmed my view and we decided to skip it altogether!

So, the next day, we ventured to Ross Island, the highlight of Port Blair according to me! The island had been a strategic military base for the British as well as the Japanese when they invaded, and still has quite a few bunkers intact, as well as the buildings built during that time. An interesting water boiler, among other things. There are a billion trails ( 7, to be precise) on the island, 2 of which had been wiped off by the Tsunami. That is a touchy subject for people here, and I would not want to get into it.

The place is a very small island, probably just 2km across, with deers and peacocks that haven’t seen much of mankind, resulting in a somewhat curious attitude from their side. You could easily come close to either, but try putting your hand forward, and you’ve quenched their curiosity, they make a run for it! Sadly ( Not really), I was too intrigued to think about taking photos! Photos have never been my first priority, but I think I should make it my third atleast, for now.

Here’s a not very good map of Ross Island! My brother and I, both unanimously decided when we saw it, we are going to the Light House. Epic stuff. 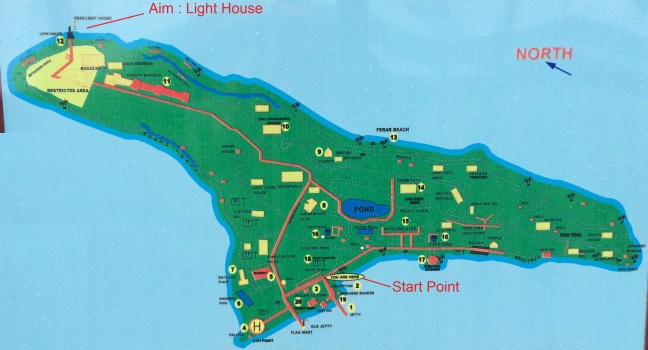 The Light House, apparently, was out of bounds. The bridge that leads to it, submerges during high tide. Now isn’t that scary!? We decided to go, it wasn’t high tide time anyways, but incase we felt the water rising, we were supposed to make a run for it. On the bridge, there were quite a few dead crabs, reaffirming the thought that yes, water does get this high during high tide! The view was worth it. 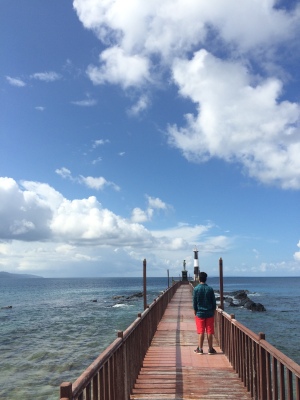 Looking back to Ross Island, 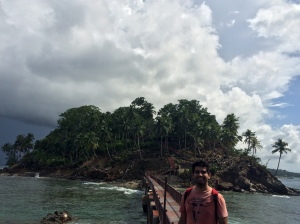 I hope we have made clear who is the better photographer 😉

We covered the whole island, and in that humid climate, that was enough for the both of us. Our mother( I didn’t forget about you, mom! ) decided to rest halfway, treating herself to some coconut water in the shade! She was ready to go back by the time we got back to her, and so were we!

It was at this precise moment, that it started raining very heavily, and I realised how lucky we had been. This is why it’s called off-season, because people don’t get to do all that they want to because of the rains! Visibility underwater goes down to a bare minimum, and it does become uncomfortable to snorkel as well! There’s rain water going down your breathing pipe! (I imagine). Lucky, very lucky! 😀

Feeling adventurous, I decided to have a Crab for the first time! Checking before hand with mom and Dev, if they had any problem with me eating Crab. The waiter, took me to a small aquarium filled with live crabs just out of the sea. I was mortified! I asked him to choose the one he would have for himself.

Pro Tip : When unsure of what to have, ask the waiter what he would have, they hesitate at first, but insist, and you would probably get the best of the lot!

P.s : If it isn’t good, don’t blame the waiter 😛 , Afterall, his tastes might be different from yours.

The Crab was the best piece of meat I’ve ever had! Not that I have had many, but well. The only problem was that, it takes a lot of effort to break open the crab, and the amount of meat inside is as little as the amount the cat would get once he does manage to catch Tweety. ( Remember the yellow bird?) . That guy puts in a lot of effort, like me, but well atleast I got the meat!

I did ask my friend, Karina to teach me how to eat a crab! I’m still waiting on that. Maybe next year? By the way, check out her blog too! She’s an amazing chef! Kay’s Kitchen <= Go here ( Opens in new tab)

Well, that’s all folks! The next day, we took the safari to catch a glimpse of the Jarwa tribes, the locals of Andamans. Simply put, I didn’t like it, and I would not suggest going for it! If you want detailed explanations, let me know!

That’s it for Andamans! Over and Out! 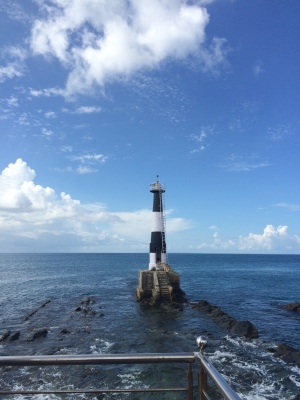