After that hell of a ride with the Phoenix, we finally ended up on Havelock. It greeted us with the most refreshing Coconut water I have ever had! Coconuts are plenty, so are the vendors! I found them to be very reasonable too, 30 rupees for some of the biggest coconuts ever. Since we weren’t backpacking, we had a decent amount of luggage, which left us with no option but to take an auto to our resort, the Barefoot Scuba Resort.

The people at the resort were really helpful, and I’d recommend staying there, any day! They have facilities for solo-travellers as well as families. Nice little cottages overlooking the sea, with a slightly rocky beach! We dumped our luggage in the house, and went out to talk to the Resort owners about the one thing I really wanted to do here: Scuba Diving! We got our dive scheduled for 7 AM the next morning, all three of us! Just a little background information: I don’t know how to swim! I had been scared of drowning for quite some time.

People find me peculiar in the sense that, I love vegetarian more than Non-vegetarian! So, when I’m home, around Delhi, I never really eat any non-veg. However, once I go out (of Delhi?), I never hesitate to try out new delicacies! Thankfully, mom and Dev don’t have a problem with this.

This was one such day, where the restaurant in the resort got me such amazing fish curry and rice! This was better than the Goan Curry in Goa! I had to inquire about the fish, which turned out to be :

No, it was not the Red Snapper! Red-snapper tastes much better, dry! It was the Trevally. It is actually pretty common, sort of a staple over there!

Fast-forward, next morning, excited and nervous at the same time. I’m going Scuba Diving today. I slept early, and rose early, with the sunrise, which happens at 4:30 am.

Calls for one hell of a view though!

That day, was one of the best days of my life. We had a quick breakfast and tried on our wetsuits, which are supposed to help one float as well as keep the body warm. This was followed by the briefing by the dive instructors, and a NOC. You die, it’s on you. It had a clause about blood pressure, and my mother was apprehensive about it. So, in the end, it was just Dev and I, and another cute girl who had also just arrived there, Nikita. I don’t want to go into the details of the briefing, let’s just say if you’ve seen Zindagi na Milegi Dobaara, the hand signals shown in the movie were accurate!

This is where things got really interesting. It actually just takes you about half an hour to an hour to get used to breathing underwater using your regulator,which is a cool way of saying oxygen mask attached to the oxygen tank on your back, supported by the BCD jacket, or the Buoyancy Control Device jacket, which is again a cool way of saying the lifejacket with a variable amount of air inside.( I’m doing engineering 😛 )

We started on the beach, in shallow water, and the first few minutes were scary as ****! I started to panic as soon as I got my head underwater, I think that was my natural instinct. But, the instructors were pretty cool about it, asking us to relax and giving us high fives under water, which made me smile, which created an opening in between my regulator and my mouth, which meant salt water started coming into my mouth, and I shot up faster than a bullet, removed the mask, coughed the water out and started breathing normally. In retrospect, that was pretty funny! The thing with Scuba masks is that, you have googles covering your eyes as well as your nose, meaning you cannot breathe with your nose anymore, and it’s all through the mouth. The regulator has sort of a bite incision, where you “bite” to hold the regulator in place. First hurdle, check!

After a few more basic survival skills, and with no warning, Ashok just inflated my BCD, and asked me relax and put my legs up, like the ocean was a bed for me to lay on. I did, facing up,and 30 seconds later I got my legs down, and was mortified to find that I could not feel the ground beneath me! He asked me to put the regulator on, and I turned my body to be greeted by this exquisite alien place. The underworld.

This was too much too much to take in, and you have no idea how quickly the next hour passed!

It suffices to say, I conquered my fear of drowning, acquired an experience of a life time, and loved it so much that I decided to go for a second dive- a pro dive on a small island called Button Island, an hours ride by boat from Havelock.

Look at that clear water!!

Enough about scuba diving, that’s not all Havelock is famous for! The second part is Radhanagar Beach, attributed the best beach in Asia by TripAdvisor, and I will completely agree! Not that I have been on every beach in Asia, but because I can’t imagine a beach more perfect than this!

Barefoot Scuba Resort has a partner, Barefoot Resort, the more expensive counterpart on a private section of Radhanagar Beach, and we requested a pass from them to let us enter the Barefoot Resort, for lunch and ofcourse, a visit to the beach!

Just look for yourself. 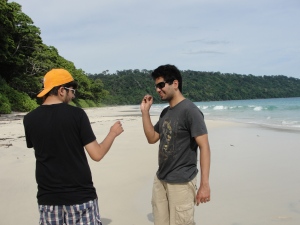 Next and the last morning in Havelock: 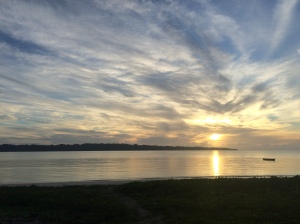 Next stop, Port Blair! This time, via Makruzz! Costs twice as much, but I felt it was worth it. I had a content and cool siesta en route to Port Blair. See you there!

Hmm, I probably should have atleast asked Nikita for her email ID. 😀

One thought on “Andaman and Nicobar Islands, June 2015 : Havelock Island”