The morning I managed to check out the Beer tents in Munich, was the morning I was on my way back, to Frankfurt! Bus at 12 Noon, weird timing, I know, means I spend the day on the road, I know. But you know exactly why I chose this bus! ( Hint :Munich : Day 0 : second para). Thankfully, I had another sliver of good luck! I found a host in Frankfurt as well : And, I was pretty much walking into one of the best experiences with Couchsurfing in my life! The second one per se, but you get the idea. Say Hi to my awesome hosts :

I was with them for the night, which was pretty eventful! We cooked, discussed religion a bit : everyone I’ve met anyplace is always interested to know why the cow is sacred, and why we don’t eat beef. You only realise how peculiar it is to the rest of the world when you meet them like this! Oh, and I finally got to play a Ukulele! Not that I’m great at it, but thanks Jenny for trying to teach me! I was kind of apprehensive that it might break 😛 Glad I got to try it 🙂 I was really touched by their hospitality. I’m relatively new to this concept, but damn, I really love it! Hopefully I’d get to host someone soon as well!

The next morning, I was off. I bade good bye to my new friends, and was off to discover the city. I wasn’t sure what exactly I wanted to do, because there isn’t really a lot to do here, and the earlier stop in Frankfurt was enough to look at the city highlights. There was a small chinese garden close by, which I decided to check out. 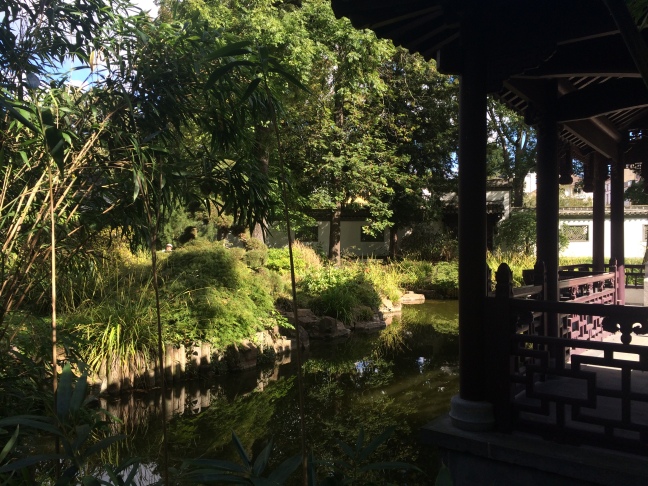 There was also a model-shot of sorts going on inside, to a corner. It was pretty hilarious as the models tried to change clothes trying their best to not be seen by curious on lookers. Haha, first time I’ve seen something like this!

There were 2 main mutually exclusive things I could have done this time : a 2 PM free tour ( Not Sandemans, not this time 😛 ) or the IAA : 27th September was the last day for the Frankfurt Auto Exposition. I had started the day thinking I’d go to the IAA, but around 1 PM, I changed my mind and went for the tour! After all, I had just seen the city, but hadn’t understood it. This tour was decent. Slightly boring in between, but majorly informative.

What’s interesting about Frankfurt : There are certain sectors where it is legal to do drugs. You see everyone on these streets, with a needle in their hands and the other arm stretched out. I clicked a photo, from a distance, as I wasn’t very comfortable going to them and asking for a picture. I don’t know if you can see them, but they’re on the right side of the street, and that’s tourists on the left side.

Oh and on the left is the Casino, next to the most famous brothel in all of Frankfurt! You remember the rules from Amsterdam, right? No photos! We then transitioned from the story on this side of the town to the city center : Passing by this really cool building. It’s cool because, one word : Free-Masons.

The sign on the arch is the Free masons logo! Damn, I felt fantastic looking at it and thinking about all the conspiracy theories surrounding it. I wonder why they declared this so openly though.

Pretty cool art installation, isn’t it? The green men symbolise ‘travelling without borders’ referring to the unification of Germany. In today’s time, possibly referring to the Immigrant situation. I don’t know for sure.

One thing, really characteristic of Frankfurt is that it is really pretty!

At the end of the tour, I went south of the river to explore this side of town, as I hadn’t been here yet. This side is much more happening. There are a lot of bars in a very small place and there’s good music all around! I also found my very first Hooters bar : Yes, the waitress was smoking hot. Wasn’t looking for a drink, so I didn’t stay long! The south side, was the right place to be this time! Simply because, the sun was setting in the North-west, and you could sit by the river, watching it go down. However, this wouldn’t have been possible from the other side of the shore!

I bought a pizza-brot : Which is essentially just garlic bread in the form of Pizza, but half as expensive. I thought it was a bargain! And, sat by the river, watching the sunset, to be greeted by a couple of swans.

And here’s something crazy : I don’t know how it got there, I just realised it while going through the photos. Please be a U.F.O.!!

I went on, to the bridge, and I was pretty much on top of it for the next two hours with good music thanks to my earphones. It was a truly magical moment! So beautiful, and so happy. I was standing on the bridge, by the side and onlookers would pass by. We would share a glance, nod and they’d move on. I just couldn’t get myself to move, it was so pretty. 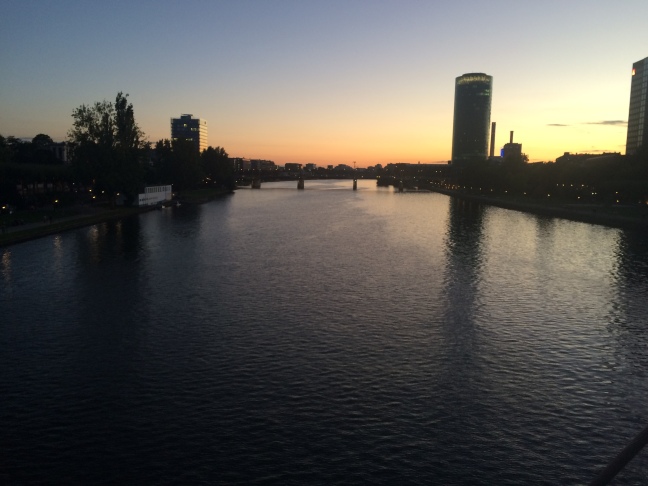 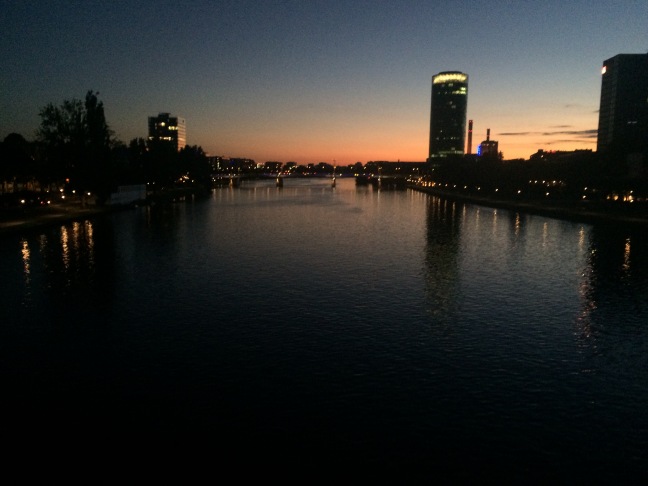 Oh, and another thing : This day was the super-moon day. Could it get any better than this!?

But, I had a fantastic time, nevertheless! The camera was just secondary. One minute in between, get it done with, and restart looking into the beauty of the night. Finally, about 8 PM, the cold forced me to find shelter. Also, my bus for Paris left at 9:30, so I figured it was time to get to the station, and get some dinner, before I boarded the bus.

There was something magical about this day that I can’t just put in words. My seat, I could extend it back slightly more than the others. There was no one sitting next to me, so I had the whole seat to myself. ( Important if you’ve ever travelled by bus for > 6 hours ). There was no one behind me. I had the most amazing music playing into my ears. I relaxed back, put my hands behind my head, the kind with elbows sticking out, looked to the left, out of the window, with nothing blocking my view, the window was spotless, and out into the light* was the moon, looking so huge, shining brightly, and the moonlight was enough to light the landscape down below. The trees, the bushes, the crops. I could see it all, just because of the moon. Then my thoughts wandered off to this girl I don’t know, who is even more beautiful and magical than this day I was witnessing, and hopefully, sometime soon, I’d get to write more about her.